Rob (68 years) is a father and retired Chief Executive of an NHS Trust who lives in Worcestershire with his dog, Polly.

He has worked in a range of healthcare settings in the UK and also has experience of working within oncology services in Canada.  He therefore understands how the NHS works, knows how to navigate the healthcare system, and is familiar with what effective cancer care services should look like.

In early March 2020, following a ‘Well Man’ health check at his GP practice, Rob was told that he had an elevated PSA blood test result (this is a blood test primarily used to screen for prostate cancer).  Following further tests, his GP quickly organised an MRI scan at the Kidderminster Treatment Centre and a consultation with a Consultant Urologist at his local hospital, the Alexander Hospital, Redditch. 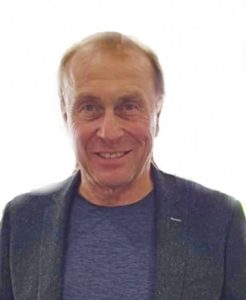 Rob’s MRI took place on 19 March and was reported by a Consultant Radiologist.  It showed a PIRADS score (Prostate Imaging Reporting and Data System), sometimes referred to as a Likert score, of 4 or 5, indicating it was likely, or very likely, that he had prostate cancer and needed to be treated.  The MRI Report was sent to Rob’s consultant urologist and a follow-up consultation was booked for 27 March.

Due to the COVID-19 lockdown announced on 23 March, Rob’s follow-up consultation was moved to a telephone appointment.  However, he did not receive a phone call at the arranged time.

Rob called his consultant’s secretary and the outpatient department, but could not get a response.  He then called the hospital switchboard and asked to speak to the senior clinician on duty for urology. He was put through to the senior house officer on duty for urology who could not explain why the appointment had not been kept. However, he assured Rob he would be called back either that evening or the following day.  No call was received.

It took Rob almost two weeks of chasing individuals and hospital departments daily, including enlisting help from the Patient Advice and Liaison Service (PALS) before he was eventually contacted by his consultant.

During that consultation, Rob was told that he would be scheduled for a biopsy in two to three months’ time and that he should not be concerned, as prostate cancer was ‘slow growing’.  In total, his consultation lasted less than 10 minutes.

Worried that his PIRADS score meant that his cancer was likely to be serious and could not wait two to three months for a biopsy, Rob spoke to his GP who, at Rob’s request, arranged for him to be referred to the Regional Urology Service at the Queen Elizabeth Hospital in Birmingham.

While he was waiting to be contacted by the Regional Urology Service, Rob was aware that this might take some time. He decided to contact a private consultant for a second opinion.  On the basis of the findings from his MRI Scan undertaken previously, the consultant agreed that Rob may have an aggressive tumour which needed further, urgent investigation.

Rob underwent a PSMA Pet Scan on 4 May.  This confirmed the presence of a multifocal PSMA positive prostatic primary cancer, involving both lobes of the prostate.  It was proposed that there could be early capsular involvement posteriorly but no metastatic disease. The PET CT Staging of Rob’s cancer was T2c/3aN0M0. On the basis of these findings, his private consultant recommended that Rob urgently undergo a Trans Rectal Biopsy. This took place on 14 May.

The biopsy confirmed the presence of an adenocarcinoma with a likely Gleason score of 4+4, which meant he had a relatively aggressive cancer which would almost certainly spread unless it was treated while it was still contained.  Rob opted for a radical prostatectomy, which took place on 30 May.

Unfortunately, the histology result from the tumour Rob had removed, showed that he actually had a Gleason 4+5 adenocarcinoma, with some surrounding Gleason 3+3 cancer, and extensive extra-prostatic spread.  He has a high grade tumour which has broken out of the prostate capsule and he has a high likelihood of residual disease.  Now all Rob can do is wait to have more blood tests to determine what further treatment he will need.

Rob says: “My initial experience of having my prostate cancer diagnosed through my primary care practice was exemplary. My diagnostic tests were organised swiftly and I was treated with sensitivity. However, once a referral had been made to a consultant urologist at my local acute trust all of this changed.

“Not only did the consultant not keep his appointment with me, but during his contact with me almost two weeks later he was dismissive, saying if I had cancer, it would typically be a slow-growing tumour and a biopsy could wait for two to three months.

“Based on this experience, I decided to take matters into my own hands and sought a second opinion from a private consultant urologist. His interpretation of my original MRI scan and the tests he subsequently organised indicated I had large, aggressive cancer which needed urgent treatment. Within six weeks of an initial consultation with my private consultant urologist, I had undergone a radical prostatectomy and I am currently awaiting the results of postoperative tests to determine my next steps treatment-wise. Had I not had the knowledge and experience to navigate the complex system or had I not been able to secure the resources to pay for my treatment privately, the outcome would have been very different.

“I have decided to speak out about the mismanagement of my care under an NHS consultant urologist in the hope that it prevents similar mistakes being made with patients who do not have the opportunities that I have had to deal with the situation.”

“Unfortunately, Rob’s story is one of many we are hearing about from cancer patients up and down the country, who have been severely affected by the disruption to oncology services as a result of COVID-19.

“There are long delays to cancer screening, diagnosis and treatment, with some reports suggesting that biopsies are running at 30% of normal. Worryingly, there are over 840,000 people waiting for diagnostic tests and over half of them have been waiting for more than six weeks, putting them at serious risk*. Urgent action is needed to turn the tide.

“Cancer does not stop for a global pandemic. The consequences of delays to essential diagnostics and treatment such as screening, biopsies, X-rays and scans, chemotherapy, radiotherapy, and elective surgery are devastating to cancer patients and their loved ones. Early, accurate diagnosis followed by rapid access to effective, timely treatment is critical to survival.

“Rob is one of the lucky ones. As a retired NHS chief executive, he understands how to navigate the complex healthcare system and has the skills and tenacity to be his own advocate. He was also extremely fortunate in having the funds available to pay for a second opinion and surgical treatment privately. However, not everyone has those advantages.  There are seriously ill cancer patients who, if cancer services and diagnostics do not clear the backlog and vastly improve very quickly, will fall through the cracks and lose their lives.”

If you or a loved one has suffered due to misdiagnosis, delayed diagnosis, delayed treatment, treatment errors or any other type of medical negligence, then please get in touch. Call Novum Law on Freephone 0800 884 0777, email: info@novumlaw.com or complete the enquiry form on this page.

Baby Loss Awareness Week (#BLAW21) is a campaign to raise awareness about pregnancy and baby loss and an opportunity for those affected to remember and commemorate their babies’ lives. Throughout...

Can I make a claim if I’m hit by an uninsured driver?

If you have been injured in a road traffic accident that was not your fault, the law says you can make a personal injury compensation claim. If you were hit...

Living with Asbestos Disease – Who Cares for the Carers?

Asbestos diseases cause significant suffering in those affected. They are often debilitating and life-changing. In the case of mesothelioma (a cancer of the thin tissue covering the lungs, or in...

The Parliamentary and Health Service Ombudsman (PHSO) has finally published its report on the death of an eight-week-old baby, Ben Condon at Bristol Children’s Hospital in April 2015. The PHSO...