Resolve to Drive Safely for Evey in 2016

A new campaign asking motorists to pledge to drive safely is being launched by the parents of Evey Staley, who was killed outside her home in Cowes just over three years ago by an intoxicated and speeding driver.

Neal and Penny Staley are asking people to make the Isle Drive Safely: Remember Evey pledge during the festive and New Year period.  Not only is Christmas time when there may be temptation to drink and drive, New year is a time when many people seek to make resolutions for the coming year and beyond.

Already many island companies, including Island Roads and Southern Vectis, have agreed to support he campaign.
Neal and Penny are hoping the campaign will be backed by other companies and well known faces across the Island, and that hundreds will take the safe driving pledge and make it a lifelong commitment.

“We can never bring Evey back and as you can imagine, this sense of loss is particularly poignant at this time of the year.  But if our efforts to highlight the importance of driving safely prevent just one other family having to go through the nightmare that we endure to this day then we can draw some comfort,” said Neal.

“The pledge does not ask anything difficult of motorists.  It just asks them to keep within the law and to follow basic principles of common sense.  Just by driving in that way they will be making an important and possibly life-saving contribution to keeping our roads safer.”

Neal and Penny were both in their car with ten year old Evey, a back seat passenger when they were hit by a speeding car as they manoeuvred out of their driveway at the start of a trip to the shops in August 2012.  Not only did they suffer the tragic loss of their daughter but Neil and Penny were also both severely hurt.

The driver of the car involved, Robert Blakely was jailed for ten years in 2013, after pleading guilty to causing death by careless driving.  He had been drinking and had smoked cannabis before taking to the wheel.

Neal said:  “Our daughter was taken from us in a criminal act by someone who showed no regard for the law or for the safety of other road users.  But not all accidents are like that and even momentary lapses in judgement, poor decision making or not driving in accordance with the speed limits and prevailing conditions can have devastating consequences.

“Taking a personal pledge – and sticking to that commitment – is not onerous but it really could help prevent an accident.”

The campaign asks people to make the Isle Drive Safe pledge and share their pledge via social media, inviting others to do the same.

Neal said: “Christmas and New Year is a time of hope and goodwill and we are sure people will respond positively at this time of the year.  The reality is that the more people sign up to the pledge and stick to their commitment then the safer our roads will be.”

Paul Herbert, Island Roads service director said:  “We take road safety extremely seriously and our drivers attend continual driver training.  We expect them to always travel safely both while they are at work and also in their own time.  I am happy to take the pledge myself and I will be encouraging all island Roads staff to do the same.”

Darren O’Sullivan from Novum Law comments “Novum Law is a keen supporter of the ‘Isle Drive Safe’ Campaign which is an Isle of Wight-based road safety charity launched by families of people killed in road traffic accidents on the Island.  The Chairman is Neal Staley, father of Evey Staley who was sadly killed in August 2012 by a speeding driver who was twice the drink/drive limit.  Evey was just 10 years old when she was killed.  To read more about the charity and to learn how you can take the ‘Isle Drive Safe’ pledge visit http://www.facebook.com/isledrivesafe. 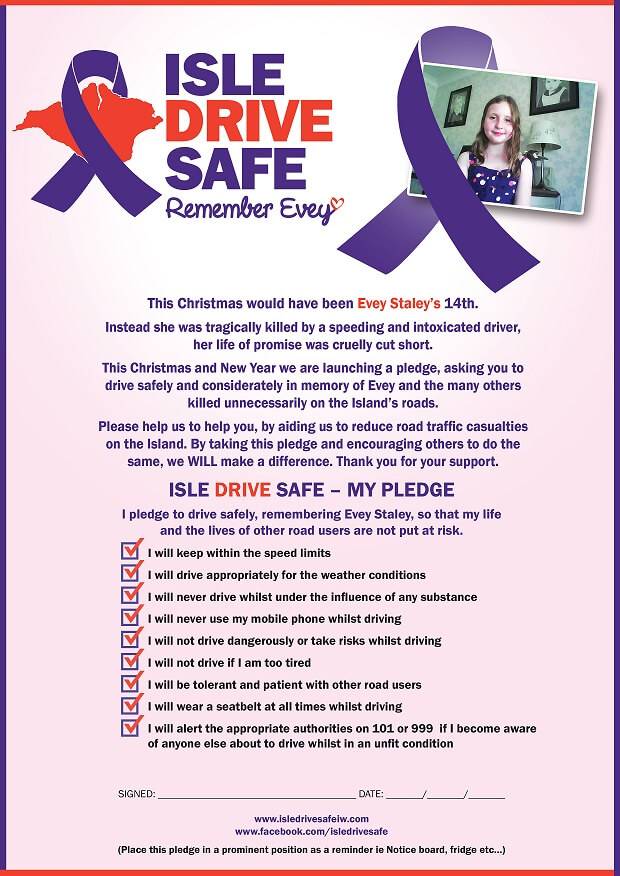