Mitchell was born in 1994 with aortic valve stenosis (AVS) which happens when the heart’s aortic valve narrows. At 2 years old he received a balloon aortic valvuloplasty, a procedure in which a balloon is inserted into the valve and inflates.

Three years later, his pulmonary valve was replaced with a donor valve, but due to complications Mitchell required a pacemaker. Sadly, he would suffer heart problems for the rest of his life.

Over the next 10 years, Mitchell had many surgical procedures because of his complex congenital heart disease.

Despite his condition, Mitchell enjoyed a full and active life. He was engaged to Danielle and the couple had a daughter Lylah, who he dearly adored. 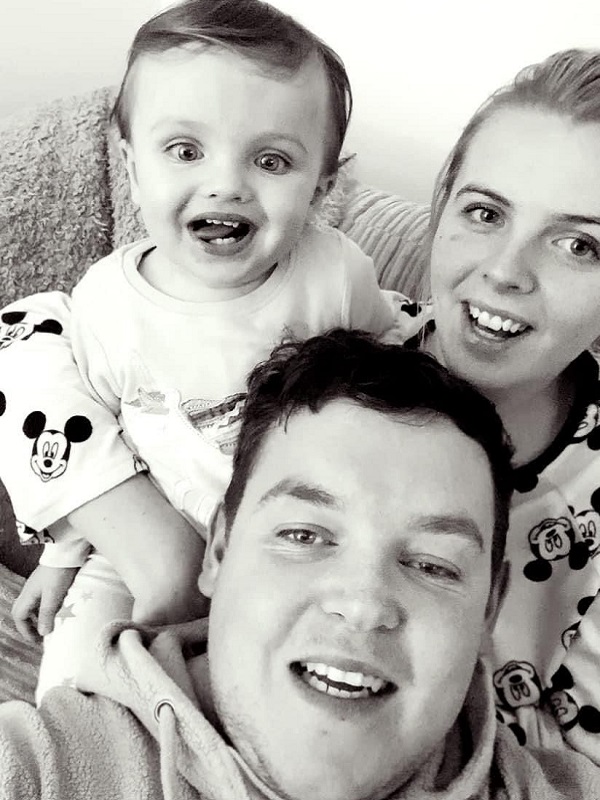 A passionate football fan Mitchell was unable to play due to his heart condition, so he became heavily involved in community youth teams, coaching, and helping on the side lines. He also raised money for charities and was awarded ‘Fundraiser of the Year’ by the British Heart Foundation.

Unfortunately, by March 2020, Mitchell’s health was visibly deteriorating. His family were extremely concerned for his health. They could see he was struggling, becoming more breathless and lethargic in front of their eyes.

During the height of the Coronavirus pandemic, in July 2020, Mitchell’s pacemaker was running dangerously close to its minimum battery life. Mitchell was 100% reliant on his pacemaker and without it, he was likely to die within minutes.

While awaiting the procedure to replace the pacemaker it was discovered that his pulmonary valve was now in desperate need for replacement, requiring further surgery.

And a few months later, there was more bad news. Mitchell was told that the pulmonary valve was leaking extensively. Not only that, but his tricuspid valve had also deteriorated. It had narrowed to a critical state and was hardly working.

Over the next few months, Mitchell waited for news about his upcoming double valve transplant surgery at the Bristol Heart Institute. It was a difficult time, and Mitchell’s mum, Caroline Powell, regularly contacted the hospital to find out when it would take place.

They were finally advised that his transplant was booked for 3 February 2021. This would follow a pre-operative assessment, to be conducted over the phone due to Coronavirus restrictions.

He was told to pack an overnight bag and, if the procedure went well, he could leave hospital the same day, if not the next. Mitchell and his family were under the impression that it was a routine procedure, and that he would be ‘in and out’.

On the morning of the procedure, Danielle was asked to leave Mitchell as he went in for his surgery, but at 1pm she received a call to say there had been complications. Mitchell had gone into cardiac arrest.

The surgeons fought all day for Mitchell, but sadly, he died that evening. Rather than the routine surgery Mitchell and his family has expected, he had undergone a very rare and complex procedure.

The inquest into Mitchell’s death

The inquest noted that Mitchell’s condition from March to October 2020, and leading up to his procedure, was deteriorating.

Coroner Maria E Voisin ruled that Mitchell died due to complications during the procedure to replace his pulmonary and tricuspid valves. She said:

Since Mitchell’s death, his local community has been paying tribute to Mitchell’s life. In September 2021 there was a celebrity charity football match in Mitchell’s memory, raising vital funds for the British Heart Foundation.

Mitchell’s family paid this tribute to him:

“Mitchell was dedicated to raising money and supporting the British Heart Foundation, and never forgot about the help he received throughout his life.  He started fundraising at the age of just 13 and we were so proud when, at the age of 18, he was awarded Young Fundraiser of the Year by the British Heart Foundation.  He was an avid Swansea City Fan and was passionate about football.

“Mitchell was a well-known and much-loved member of the community, he loved helping charities and helping others. He would go to any length to make others happy. He was the entertainer of the family, always making people laugh. People would gravitate towards him. He was a wonderful son and partner and an amazing father.”

“I would just like to say thank you for all the support Novum Law has given us during this hard time. You put things into simple terms for us to understand and you answered all our questions. If we contacted you about anything you got straight back to us and we thank you for all the time and effort you put into being there for us. As a family we all thank you and your team from the bottom of our hearts.”

Novum Law regularly represents and supports bereaved families at inquests into their loved one’s death. To find out more information and speak to a specialist inquest lawyer, call us on Freephone 0800 884 0777 or email info@novumlaw.com.

May can only mean one thing – and that’s Muffins for Meso! Last week, Novum Law colleagues across our offices showed off their expert baking skills for our first in-person...

This May, Novum Law was delighted to both sponsor and attend the Lung Cancer Nursing UK (LCNUK) 2022 Annual Conference in London, which was held in-person for the first time...

Bristol University has been ordered to pay £50,000 in damages, including funeral costs, to the family of ‘hard-working and high achieving’ physics student Natasha Abrahart, who took her own life...

This week is Action for Brain Injury Week, a yearly campaign to raise awareness of the life-changing impact of brain injuries. The campaign is organised by the brain injury association...